"The Ten" and the Eleventh Horn of Daniel

August 11, 2011
What are we to make of Daniel’s Eleventh Horn (Dan. 7:8); could it be that the former, yet revived, WEU or Western European Union will make up the 10 nations the coming Antichrist King will rule over? Read on.

Most people have never heard of the WEU; however they have existed since 1954. Their purpose was to enforce the amended version of the Treaty of Brussels of 1948. From Wikipedia we read:

Since the end of the Cold War, WEU tasks and institutions have been transferred to the Common Security and Defence Policy which is being framed for the geographically larger and more comprehensive European Union. This process was completed in 2009, when a solidarity clause between the member states of the European Union which was similar (but not identical) to the WEU's mutual defense clause, entered into force with the Treaty of Lisbon. The states party to the Modified Treaty of Brussels consequently decided to terminate that treaty on 31 March 2010, with all the remaining WEU's activities to be ceased within 15 months. On 30 June 2011 the WEU was officially declared defunct.

Thanks to my special friend, and brother in Christ Glenn, I was made aware of the  Hal Lindsey Report of August 5th. Astonished by what I read, I refer the reader to the link for more information regarding the role of the new WEU. According to Hal’s research, the WEU did indeed become defunct on June 30th 2011, but immediately on the following day, July 1st 2011, they were realigned and given special administrative powers and would hereby be known as “The Ten.”  The official document of duties is outlined in the following PDF file called:

Having said the above and noting that this council has special permanent administrative and financial powers to execute the business of the former WEU, it could easily be seen that they qualify as a candidate for the 10 member nations of the “Revived Roman Empire” spoken of by Daniel the prophet and John the Revelator.

The prophet Daniel was given a vision of four beasts that would arise out of the earth. Each beast represented a kingdom that was to yet come. Daniel writes: 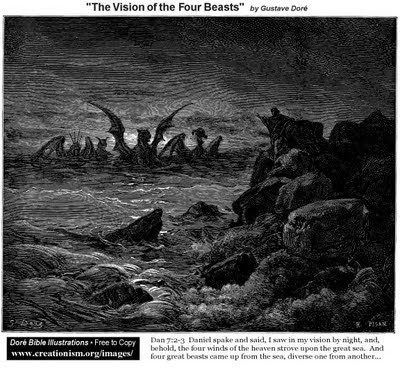 3 And four great beasts came up from the sea, each different from the other.
4 The first was like a lion, and had eagle's wings. I watched till its wings were plucked off; and it was lifted up from the earth and made to stand on two feet like a man, and a man's heart was given to it.
5 And suddenly another beast, a second, like a bear. It was raised up on one side, and had three ribs in its mouth between its teeth. And they said thus to it: 'Arise, devour much flesh!'
6 After this I looked, and there was another, like a leopard, which had on its back four wings of a bird. The beast also had four heads, and dominion was given to it.
7 After this I saw in the night visions, and behold, a fourth beast, dreadful and terrible, exceedingly strong. It had huge iron teeth; it was devouring, breaking in pieces, and trampling the residue with its feet. It was different from all the beasts that were before it, and it had ten horns.
8 I was considering the horns, and there was another horn, a little one, coming up among them, before whom three of the first horns were plucked out by the roots. And there, in this horn, were eyes like the eyes of a man, and a mouth speaking pompous words. Daniel 7:3-8 (NKJV)

Later in the chapter the vision is interpreted to be four kings that would arise, Dan. 7:17. Historically they have been identified with Babylon, Medio-Persia, Greece, and the Roman Empire. The fourth beast was different in that it had ten horns. Among the ten was an eleventh that would arise. Most scholars, including myself, believe this eleventh horn to be that of the Antichrist. He will arise, then subdue 3 of the former Ten kings and exercise authority over them all. Daniel continues in vs. 24-25 with:

24 The ten horns are ten kings Who shall arise from this kingdom. And another shall rise after them; He shall be different from the first ones, And shall subdue three kings.
25 He shall speak pompous words against the Most High, Shall persecute the saints of the Most High, And shall intend to change times and law. Then the saints shall be given into his hand For a time and times and half a time. Daniel 7:24-25 (NKJV)

The description is simple, he will arise, speak arrogantly against God, and persecute the tribulation saints for 3 ½ years (final 3 ½ year Great Tribulation).

Knowing these things are sure, and seeing the signs of the return of Christ all around us, could this group called “The Ten,” and made up of Belgium, France, Germany, Greece, Italy, Luxembourg, the Netherlands, Portugal, Spain and the United Kingdom, be the one Daniel saw? It is very possible. Only God really knows. But to be sure, be watchful! If it is so, and we are still on this earth awaiting the Rapture of the Church, and an eleventh nation arises having authority over these Ten, know that time is short.

My friends, I write the above merely for awareness sake. The Lord’s coming is sure and His reward will be with Him. Time is running out. Please consider repenting of your sin, and turning your heart to Christ for His forgiving grace.  John 3:16 says, “For God so loved the world, that He gave His only begotten Son, that whoever believes in Him, will not perish but have everlasting life.”

That promise is sure. Won’t you trust Him today?

Unknown said…
A wonderful reminder of the need to stand for the gospel truth in peace like Stephen...enduring hardship like a soldie.
August 6, 2019 at 9:50 AM

Michael Henderson said…
Yes indeed. The ten kingdoms/regions that will one day rise and represent the Antichrist's kingdom (Daniels 10 Toes - Dan 2:42-43) will happen. Thankfully, all true believers will raptured before the time it takes global control. No this is not and escapist belief, and yes, I, and millions of others are doing God's business till He comes. But even Jesus stated: Luke 21:36 (NKJV)
36 Watch therefore, and pray always that you may be counted worthy to escape all these things that will come to pass, and to stand before the Son of Man."

So we are looking for the Blessed Hope and Glorious appearing of our Lord and Savior Jesus Christ, (Titus 2:13). These things in the article point to events on earth before He returns at the end of the tribulation and to the Mt. of Olives (see Zech. 14:4-5, Rev. 19:11-17, where Jesus returns as King of kings and Lord of lords and AC and armies are crushed. See also Acts 1:11.
Thanks for posting.

March 29, 2014
FREE EBOOKclick to download - When book comes up click down arrow on Upper Right to save a copy.

A while back the Barna Group released a report titled, "Six Reasons Young Christians Leave Church."1

Under reason two, "Teens’ and twenty-somethings’ experience of Christianity is shallow" they write:

"A second reason that young people depart church as young adults is that something is lacking in their experience of church. One-third said “church is boring” (31%). One-quarter of these young adults said that “faith is not relevant to my career or interests” (24%) or that “the Bible is not taught clearly or often enough” (23%). Sadly, one-fifth of these young adults who attended a church as a teenager said that “God seems missing from my experience of church” (20%)."

If one takes a look at the modern church-scape I can see why. The gap between those pastors and teachers that are fired up about Jesus and those that do not preach all of the gospel was never more ap…
4 comments
Read more

June 26, 2014
In the Bible there are several sexual sins that are categorized under the term,"Sexual Immorality." Not the least of these is, "Fornication." However fornication has become an outdated, and in many places, the acceptable sin in the late twentieth and twenty-first centuries. As a matter of fact, many do not even know what the term "fornication" means. Since the advent of the modern Bible translation, many have never heard of it. This article focuses on what the Scripture says about this out-of-control acceptable sin.

Fornication is mentioned thirty-six times in the Bible (MT), thirty-two times in the New Testament. In almost all modern translations the word has been substituted with, "sexual immorality" and has come to mean any number of sexual sins. However, sin (missing the mark) is still sin and sin still separates a person from God. So why has this sin become so acceptable even in modern churches????

UPDATE: Here is a testimony of life after …
5 comments
Read more

May 18, 2012
Perhaps you have seen the story of "Daniel's Gloves". It has been floating around the internet since 2001 according to snopes.com. They also tell us the original author is Richard Ryan the assistant Pastor of a Church in Indiana.  I refer to this story—which you will find posted below mine—because of the effect that helping one in need can actually have on a believer’s life.
One of the things I have done in the past is monitor just how many people there are who simply pass on by those who are holding a sign stating “Will work for food” or “Need Help for me and my children.” If you ask the hurting they will tell you there are literally hundreds and hundreds who just will not help. Truly it is a sad testimony that “one or a few bad apple(s) can spoil a whole bushel.” It is definitely something I also have observed. For some reason we either fear them, fear confrontation or fear being deceived. Whatever the reason, I often wonder how God feels about it.
Just a few months bac…
Post a Comment
Read more


Let us be glad and rejoice and give Him glory, for the marriage of the Lamb has come, and His wife has made herself ready." And to her it was granted to be arrayed in fine linen, clean and bright, for the fine linen is the righteous acts of the saints. Then he said to me, "Write: 'Blessed are those who are called to the marriage supper of the Lamb!' " And he said to me, "These are the true sayings of God."

The passage above speaks of two distinct events, the Marriage of the Lamb and the Marriage Supper of the Lamb. Both of these events are reminiscent of the ancient Jewish wedding ceremony where the Bride would become betrothed to her Groom and he would go away to build her a home. In the meantime she would wait anxiously for his return with shouts from his wedding party of "The Bridegroom Comes!" When the shouts were heard she wou…
2 comments
Read more