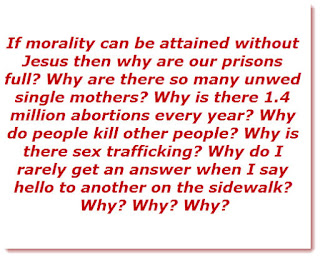 10  "Who among you fears the LORD? Who obeys the voice of His Servant? Who walks in darkness And has no light? Let him trust in the name of the LORD And rely upon his God. 11  Look, all you who kindle a fire, Who encircle yourselves with sparks: Walk in the light of your fire and in the sparks you have kindled-- This you shall have from My hand: You shall lie down in torment. Isaiah 50:10-11 (NKJV)

Just this past week I was very surprised to see the headline on the Christian Post, “Kids Need Both Mom and Dad, Says Gay Man Opposed to Gay Marriage.” * To be honest it is the first time I have ever read of a Gay man who admitted that children need both female and male role models. In a pop-culture where decisions concerning morality have been largely left up to the children this was a refreshing story. Sure, it is a one-off event but could it lead to more Gays and Lesbians realizing the truth? Let’s hope so. But even though we may agree with the admittedly Gay man and that it is a step in the right direction, morality without Christ is still woefully lacking and puts the responsibility for what is right and wrong into the hands of man without the authority of God backing it. This means decision making at the most critical times will be left up to the whim of the moment. That is where we get into trouble.


The biggest influence on the life of a child is through his/her parents. We watch dad in the shop doing things dads do or handling finances and spending and doing what dad feels is best. We watch mom shopping and making decisions on what she thinks is best for her and her family and it is these influential moments that guide a child in the direction they will travel in life. But mom and dad need a guide as well. Their decisions in life were also influenced by what they saw their parent(s) do. So the cycle continues. Fortunately some parents were raised by Godly parents and were truly blessed with the wisdom that they gained through the scripture and the Holy Spirit’s guidance. But if today’s parents were influenced by the immorality of ungodly parents then they will often allow this to snowball on down to their children.

Our society today is rife with generations of children who were raised by parents who took up the philosophy of “Relativism” with the slogan, “Carp Diem” which has strayed from its original meaning of “plucking the day for what is ripe” to “live for the day doing what seems right in your own eyes because you may never have another chance to do it.” The issue is with the statement “right in your own eyes” and goes back to the problem of morality without the authority of God. If you have no rules in life except those that are self-imposed then your morality will be tainted at best and disastrous at worst. It is a known fact that when humanity is left to themselves they have never been able to get a reign on defining true solid morality. This is why today there is a rampage of drugs, alcoholism, sexual sins of all stripes, sex trafficking, murder, hatred toward others, coldness in families, kids choosing to “Live together” instead of marrying, and single mothers raising many children with different fathers who are never around to “Father” their own child or take responsibility. Sure these are deadbeat dads, but there would have never been the need to coin that term if the passing on of defined morality begotten through a relationship with Jesus Christ had been seen as the most important responsibility a Parent has to his or her child.

The sins of the parents are weighing down on pop-culture. The first generation of “relativism influenced” children have been running our country, our businesses, and our educational institutions for some time and it is starting to take its toll. It is sad to see so many ideals based upon wholesome and holy standards being crushed and trampled before our very eyes. So sad that it hurts and grieves the Spirit of God. But one thing that will never change is the fact that we all must give account of ourselves before God, Rom. 14:12. Paul was not mincing words when he spoke these things. And the saddest part of it all is that the parents will be judged and found guilty for not passing down God’s most precious gift, salvation and the way to receive it through our Lord Jesus Christ.

There is time to change
It is not too late to take the step forward in getting your life path corrected. The Bible is clear that God sent His Son, the Lord Jesus Christ into this world to save us from ourselves and our bad choices called sin, John 3:16. It is also clear that it was never the intent of the Father to bring condemnation to the world, John 3:17. But it was His intent for us to believe by faith that Christ died for our sins, was buried, and arose to heaven after three days just as the Scripture declares, 1 Cor. 15:3-4. That has never changed and never will. The Bible declares that our life is as a vapor or even as the morning dew which appears then vanishes. While the dew is still on the vine why not consider how much those two arms stretched wide upon that cross really mean? Christ died to save sinners… not just a few but all of them. You can turn to Him now and allow Him the reigns of your life through simply confessing your weakness and sorrow for the sins of the past and present, asking forgiveness, and making a commitment to God to live for Him by asking Christ to take control of your life. In doing so you will become a new creature with a new lease on life and one in which you can now begin to rightly influence others.