Hated: Christ in You, On Trial 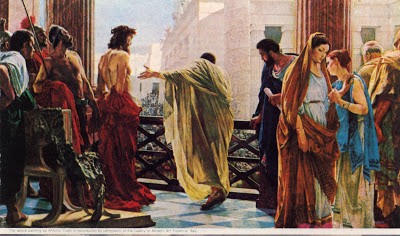 All these are but the beginning of the birth pains. (9)  "Then they will deliver you up to tribulation and put you to death, and you will be hated by all nations for my name's sake. (10)  And then many will fall away and betray one another and hate one another. (11)  And many false prophets will arise and lead many astray. (12)  And because lawlessness will be increased, the love of many will grow cold. (13)  But the one who endures to the end will be saved. (14)  And this gospel of the kingdom will be proclaimed throughout the whole world as a testimony to all nations, and then the end will come. -Matthew 24:8-14


In this snippet of what is commonly referred to as the Olivet Discourse, Jesus outlines what He knew was going to be true for those who would follow in His footsteps, embracing Him as the one and only way to deliverance from sin and the inheritance of eternal bliss. God-fearing Christians know His words to have a final fulfillment that occurs in the last days of human life as we know it before He returns to setup His kingdom, one that will never end, Is. 9:7. He tells us there will be birth pains that will eventually give way to the birth of horrible tribulation. Hatred and physical death will be the emotion elicited toward His followers. Because of the weakness of the flesh, the suppression of truth, and the fear that conflict arouses many will be divided; some choosing to side with their majority peers, those who hold to a non-threating and hedonistic worldview, while others, those who side with life, will hold to the truth found only in Christ. They know that the ways of the world are but slippery slopes that have as their end the netherworld of death; and it was from this death that they fled to Jesus finding Him to hold the promise of life. Christ in us, the Hope of Glory would remain their foundation. These divisions will be strong and they will run deep. Family members will divide and hate one another. We saw this one year ago in June of 2012 when Chick-Fil-A took a stand for traditional marriage, lighting up Facebook and Twitter as friends viciously attacked friends and family members unfriended family members.

Jesus also spoke of deceptions abounding as many will rise up and call themselves Christian, even doing good works for humanities sake, but their teaching is the morality of the world--a morality with no foundation--a morality that leads to judgment. Just this week, June of 2013, the president of Exodus International, Alan Chambers, announced the exodus from once being a Christian organization that taught there was deliverance from sin through Christ to standing down for the sake of promoting the homosexual lifestyle. Oh yes, they are rebranding themselves, using Christianity as the cover, but they have backed away from the eternal truth of Scripture and the power of God. This action is anything but God glorifying and those who walk in the Spirit will immediately recognize the deceit.**

Jesus taught that in these final days lawlessness would breed cold hearts and what was once proper etiquette and good moral behavior based upon the Christian ethic, will become putrid and sickening to those who desire to live apart from God's commands--commands that exist for the good of families and the communities they make up. But even so, as society plunges downward God's Word will never become void. And despite it all the gospel will be preached more than ever from the rooftops of communities around the world ever echoing with staccato-like rhythm the call to life found only in Christ. The great Apostle Paul made an outstanding spiritual observation concerning this very matter. He wrote:

"But I want you to know, brethren, that the things which happened to me have actually turned out for the furtherance of the gospel, so that it has become evident to the whole palace guard, and to all the rest, that my chains are in Christ; and most of the brethren in the Lord, having become confident by my chains, are much more bold to speak the word without fear. Some indeed preach Christ even from envy and strife, and some also from goodwill: The former preach Christ from selfish ambition, not sincerely, supposing to add affliction to my chains; but the latter out of love, knowing that I am appointed for the defense of the gospel. What then? Only that in every way, whether in pretense or in truth, Christ is preached; and in this I rejoice, yes, and will rejoice," Phil 1:12-18 (NKJV)

What an awesome revelation to the 21st century believers! And what was the outcome of this mockery and arrest of Paul? The whole Palace guard heard the gospel--even from the untrained lips of the pagans Jesus was preached. Those who were believers grew bolder and bolder and it was Christianity that would conquer the hearts of the people. Fear subsided and the church grew mightily. Jesus was on trial before the cross, yet it was the cross that gave way to the resurrection to life. Jesus was on trial in 1st century Rome, but it would be the gospel that would stem the tide of hatred. Today, Jesus is on trial again. That coupled with the ever increasing prophetic signs of His soon return tell us that it is He that will once again have the final word. The ethnic and family groups of the nations will rage against one another and they will fiercely try to put this Jesus back into the grave, but little do they know that we who hold proudly the banner of the cross of Christ are more than they will ever be able to devour. We are more than conquerors through Him that loved us!

Christ may again be on trial; Christians may again be spilling their blood; Families may be torn asunder but the Gospel of Jesus Christ will shine as brightly as ever before. And in the midst of it all, one day a trumpet will sound and we who are alive will be changed and together with the dead bodies of the saints before us, we will all be raised to eternal life, 1 Cor. 15:51-54. Death will have had its day but life will grind it to powder.

The question before us all is this, "How will you stand in the day when you are confronted for your faith?" Jesus once stated, " When the Son of Man returns will He really find faith upon the earth?" Luke 18"8b.

How will you stand?