Was Jesus a Hater? 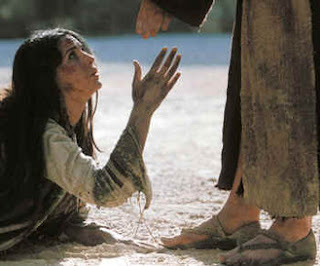 "Jesus really teaches you to hate people." I once saw this quoted online and I had to shake my head because of the ignorance, not in a condescending manner but in a mode of sadness. Like all quotes that similarly lambast Jesus and Christians, most of them are off the cuff and stated without real spiritual knowledge and wisdom of the Scripture. I can say this in sincerity because of the transformation that occurred in my own life, and because of the Scriptural precedent for it. I was as lost as lost can be and even running in a crowd that often blasphemed the Lord and ridiculed believers. But then one fateful day I needed help with life and I turned to Christ in prayer. Yes, I turned from my peers and to the One my peers mocked so viciously. He heard my cry and immediately took me from a pit of despair and set me on a mountaintop. Yes, this did happen and it happened dramatically. What occurred is what Jesus referred to as being "Born Again" of the Spirit (John 3:3). It was also the fulfillment of His promise that once resurrected He would send the Helper, the paraklētos - παράκλητος, the one who would come an make His dwelling in the life of all true and sincere believers. What those without Christ should realize is that not all who say they are Christian truly are. Many do not have the Spirit (Romans 8:9; Jude 1:19; John 3:6). So they should not be surprised to find many who are Christian in name only.

Jesus was not a "hater." Neither does He teach us in the Spirit, to hate others. There are two instances I would like to refer to in response to this accusation that Jesus teaches us to hate people.

Jesus' rebuke of the Religious Leaders of His day
Jesus was known for rebuking the religious leaders of His day. He did not hate them but He certainly was not bestowing any blessing upon them either. Their actions were turning people away from God rather than to God. For this He was righteously angry and there is nothing wrong with that. We also anger when someone harms or slights our children. In Matthew's gospel He laid out no less than eight rebukes for the religious leaders. Pride, hypocrisy, false teaching, self structured religious rules, prejudices, self-directed benevolence, selfishness, and false intents were all at the forefront. These men who were supposed to be the models of the nation--the shepherds of the flock, were incorrectly leading and feeding the people entrusted to them. They were poor representatives of God. He stated, "But woe to you, scribes and Pharisees, hypocrites! For you shut up the kingdom of heaven against men; for you neither go in yourselves, nor do you allow those who are entering to go in." (Matthew 23:13 (NKJV)) See Matthew 23 for Jesus' exposition of their hearts.

In this example Jesus gives us a lesson on the importance of faithfulness to God and His people. We are never to cause anyone to stray or to impede anyone from coming to Christ as Lord and Savior. That said, neither are we to come to Him on our own terms but rather on His alone. He is the Creator and Lord; we are the sheep in His pasture. What we are to do is to show love towards all people but Hate the sin that destroys them and even others around them.

Jesus taught us to love all people but to hate sin
Sin is a three letter word that no one who lavishes in it desires to talk about. But to someone who does not have a relationship to Christ it is the most important thing to recognize as being present in your life. Sin is what separates us from God. God did not give physical life to us in order for us to live in sin. It was never His purpose (Acts 17:26-27). His holy and just nature does not even allow Him to tolerate sin. We have this on the authority of God's word (Rom. 5:19). Just as Adam and Eve committed the one sin of disobedience in the Garden of Eden and were driven from that holy place because of that sin, so we are separated eternally from God because of our sin--even if it were only one sin. The bright side is that because Jesus was obedient to the death on the cross we also can have life by His one act of obedience.

Jesus is not a hater people and He never has been. Yes He loathes sinful actions that hurt and oppress others. And yes if our actions cause another to stumble He is not pleased. So our understandings must show that  He is a hater of sin and how it controls the thoughts and actions of humanity. It is not the person He hates but the sin that controls the person. Nevertheless we will be held accountable for allowing it to control us because we do not have too.

The cavalier attitude our society has toward its presence is certainly a painful reality to Him. He created us to love Him and to pursue His life in us -- which is the only true life that is everlasting. But instead selfishness has made its bed within us and we easily become accustomed the feel of its covering.

The only thing we find in Scripture that even comes close to putting the words Hate and Lord in the same sentence is if the subject of the hatred is in some form a sinful action against Him or against other.

Jesus is not a Hater of the people He created, neither does He teach me to Hate others.

Isaiah 45:18 (NKJV)
For thus says the LORD, Who created the heavens, Who is God, Who formed the earth and made it, Who has established it, Who did not create it in vain, Who formed it to be inhabited: "I am the LORD, and there is no other."

Proverbs 8:31 (NKJV)  Rejoicing in His inhabited world, And my delight was with the sons of men.