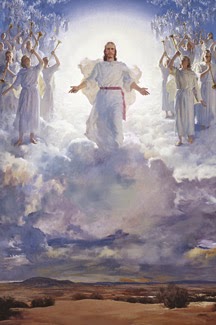 There are a lot of God's soldiers writing about how "good is evil" and "evil is good" and the failures of the humanistic approach to solving all the worlds ills, but honestly speaking, it is my observation that there are more and more of the general populace including Christians putting their heads in the sand.

When you look at your neighborhood you see people cutting the grass, driving to work in the rush hour, frequenting the diners and restaurants, bars are filled, mall parking lots are filled, parents are shuttling their kids to school, school yards are full of laughing and running children, and super markets are crowded, birds are tweeting, butterflies are flapping, and bees are buzzing--all is well in peaceful and secure America. It just looks like life is normal and so many would prefer to just rest at ease there and not be reminded of all the works of darkness all around us.

For instance, using the list above, how many realize that in America alone 120 million people (1/3 of population) are infected with HIV, Syphilis, Gonorrhea, Herpes+, and other Std's; that nearly 70 % of the black children (minority) are from single parent homes and many have brothers and sisters from multiple fathers (in our church neighborhood 42% of black and white mothers are single because of abandonment and or absent fathers); even though the percentage is smaller for white children (majority) there are 4 million more white children in single mother homes than black, and Hispanics are at 68%; that the large majority of the children do not know the difference between Noah, Jonah or Jesus and the same goes for their parents; that 60 - 80% of the population has a non-favorable view of Christians who stand publicly for their faith; that most of them know there are world issues but they feel they will pass just like those in decades past. I could go on, but there is no need. Lest we too become blind and deceived let us remember the words of Jesus:

And as it was in the days of Noah, so it will be also in the days of the Son of Man: They ate, they drank, they married wives, they were given in marriage, until the day that Noah entered the ark, and the flood came and destroyed them all. Likewise as it was also in the days of Lot: They ate, they drank, they bought, they sold, they planted, they built; but on the day that Lot went out of Sodom it rained fire and brimstone from heaven and destroyed them all. Even so will it be in the day when the Son of Man is revealed.
(Luke 17:26-30 NKJV)

When Jesus returns it will be on a day when your neighbor may be cutting his grass and another at the grocer; the Friday night football game may be playing and the local bar may be having a beer bash. Life will be as if nothing is going on around them and then swoosh, millions will just disappear. Yes, do not let the "life goes on as usual" crowds fool you. There is a stir in the air and those who know Jesus intimately also know that very shortly many of the shopping carts, automobiles, seats at the big game, and mall fairways will left empty. Then what will the world say?

I like what David Guzik quotes and says:
"For then there will be great tribulation, such as has not been since the beginning of the world until this time, no, nor shall ever be. (Mat_24:21)

And the kings of the earth, the great men, the rich men, the commanders, the mighty men, every slave and every free man, hid themselves in the caves and in the rocks of the mountains, and said to the mountains and rocks, “Fall on us and hide us from the face of Him who sits on the throne and from the wrath of the Lamb! (Rev_6:15-16)

Which will it be? Business as usual, or hell-on-earth? The two distinct “phases” of Jesus’ coming, separated by some period of time, explain the seemingly contradictory conditions which describe the condition of the world at the return of Jesus."