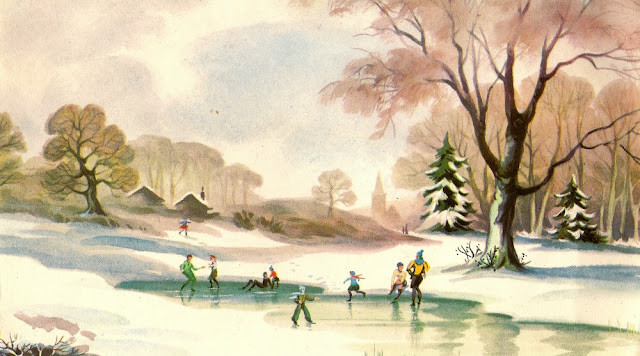 The image above reminds me of my childhood Kansas. Every winter my brothers and I would go down to a wooded patch behind our home where a low-lying seep would freeze over in winter to make our very own skating rink. We were not wealthy enough to have ice skates, and it didn't matter, our boots sufficed just fine. For hours on end we would skate or play stick hockey, all the time being so thankful that winter had come. For us winter was special. It allowed a closer time to bond together as siblings and to appreciate things such as a home and heat to warm it, hot soup, and of course snow...and in Kansas we got plenty!

Those days are gone just like the year that has just passed. I no longer live in Kansas, but Illinois. Nevertheless, the childhood memories will linger and I do hope that all of us can find something to be thankful for in our past.

Here in Illinois, Christmas passed us as fast as it arrived and the New Year has now come. We are all anticipating how the Lord will use us in this coming year. As I think about this I wonder what thoughts passed through Mary's mind as she held the Lord Jesus in her arms. Christmas, at least as we celebrate it, would have passed and the days that followed were before her. All she may have known for sure was what had been revealed to her by the angel Gabriel (Matthew 1-2; Luke 1-2). Did she know that wise-men would come from the East bearing gifts for the Babe? Did she know that shortly after she brought the Lord into this world, that the family would be soon whisked off into Egypt? I wonder if she wondered if they would ever make it back to Nazareth of Galilee? Her life and that of the Lord Jesus was purely providential at this early time. Of course, we know the many prophecies that foretold His birth and I suppose she was also aware or, at least, made aware of them as well. But even still, with much of the life of Jesus laid out in the Old Testament, she, being human, may have wondered "what did" and "what did not" apply to the future life of her Son. Its kind of like us knowing the Lord is to one day come with the clouds, whisk His church to heaven, then return to earth to set up His millennial kingdom; we still wonder about when it will be and even squabble about the particulars. But one thing I am sure of, Mary, knew her life was in God's hands and that the miracle produced in her womb would one day rule the world. This she expresses in her song:


“My soul magnifies the Lord,


47 And my spirit has rejoiced in God my Savior.


48 For He has regarded the lowly state of His maidservant;


For behold, henceforth all generations will call me blessed.


49 For He who is mighty has done great things for me,


And holy is His name.


50 And His mercy is on those who fear Him


51 He has shown strength with His arm;


He has scattered the proud in the imagination of their hearts.


52 He has put down the mighty from their thrones,


And exalted the lowly.


53 He has filled the hungry with good things,


And the rich He has sent away empty.


54 He has helped His servant Israel,


In remembrance of His mercy,


To Abraham and to his seed forever.”

It is my prayer for all, and for all who read this, that you will place your faith solidly in the hands of Jesus, the Creator of the world and the universe, the Savior and Lord over this world and for all who will believe in Him. The angel said "...you shall call His name JESUS, for He will save His people from their sins" (Matt. 1;21).

We maybe clueless as to the outcome of the days ahead, but we will never be alone if we will place our faith in the Son of God, Jesus, who also promised to all who believe, "I will never leave you or forsake you" (Heb. 13:5; Josh. 1:5). With Him, the days ahead will one day be memories of our childhood, and we will look back and say "Great is the Lord" and like Mary, "who is mighty has done great things for me."