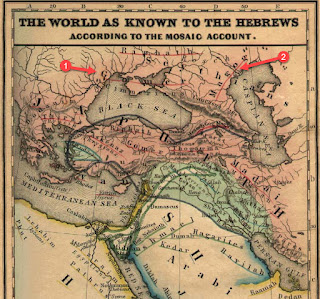 A lot of folks are wondering what is happening in the world and whether the current Russian invasion of Ukraine has any bearing on end-time events. Could the event turn into WW III? Some are very fearful and concerned about their future and by rights, we all should be at the least concerned. War always brings much fear and can be very unnerving. But can any person on earth who is fearful find hope? Yes!

As you know, I write from a Christian worldview for it is only in that worldview sure hope is found, Hebrews 6:19a "This hope we have as an anchor of the soul, both sure and steadfast." This hope is gained of course, through faith in the only one who has ever defeated death and rose to the heights of heaven where He intercedes daily for all those who will place their hope and faith in Him. That Person is the Lord Jesus Christ. Hebrews 7:25-25 states: "But He, because He continues forever, has an unchangeable priesthood. Therefore, He is also able to save to the uttermost those who come to God through Him, since He always lives to make intercession for them." For Christian believers then, there is eternal hope assured through Christ Himself. It is very uplifting to know that He lives to pray and intercede for those who trust in Him. Hope then is found in trusting in Christ for your salvation, Rom 10:9-10; John 3:16.

So, What About this current War?

If you surf the web, you will find differing opinions around whether it can be related to end-time events and many pastors may tell you no. But the truth is it depends on an interpretation of the land area that ancient Magog of Ezekiel 38-39 fame, represents. It also depends on whether you are a premillennialist, who views many prophecies related to Israel and the end-times as yet to be fulfilled. I am.

In the book Those Who are Wise Will Shine (see sidebar) under appendix A, you will find that I outline the ancient whereabouts of the nations mentioned in Genesis 10. Magog, happens to be one of those nations. Here is what I have to say:

Magog - Ezekiel 38:2, 39:1. The prophet tells us in 38:15, that it is a nation situated far north of Israel. Directly north of Israel is Moscow, the capitol city of modern day Russia. … . Josephus in Ant. 1:6.1 seems to identify them [Magog] with the Scythians, a tribe who migrated north and east of Asia Minor. 1

If you were to draw a line directly north from Jerusalem to Moscow, you would split one nation mentioned in Ezekiel 38 in half, Gomer (part of Crimea) and continuing north go through Ukraine, and then Moscow. You can do this on any map.

The key is Magog and Gomer migrated North and East of Asia Minor. Asia Minor is Turkey and North of Turkey is Ukraine which was part of the lower steppes of Russia which also was inhabited by the Scythians of whom Josephus identifies as Magog. So the land in Ezekiel's prophecy does include this land mass as part of the future area that includes being controlled by "Gog" prince over the land of Magog. The passage below attests to this: Ezekiel 38:1–6 (NKJV)

38 Now the word of the LORD came to me, saying, 2 “Son of man, set your face against Gog, of the land of Magog, the prince of Rosh, Meshech, and Tubal, and prophesy against him, 3 and say, ‘Thus says the Lord GOD: “Behold, I am against you, O Gog, the prince of Rosh, Meshech, and Tubal. 4 I will turn you around, put hooks into your jaws, and lead you out, with all your army, horses, and horsemen, all splendidly clothed, a great company with bucklers and shields, all of them handling swords. 5 Persia, Ethiopia, and Libya are with them, all of them with shield and helmet; 6 Gomer and all its troops; the house of Togarmah from the far north and all its troops—many people are with you.

The prophecy goes on to say they will invade the Land of Israel in the last days at which time they will be destroyed on the mountains of Israel. This is commonly referred to as "The Battle of Gog and Magog."
So again, is Ukraine in prophecy? Not by name. But the ancient land looks like it is. So if Russia takes it over, it along with Crimea (ancient Gomer) are parts of the land mass mentioned in Ezekiel 38.
If this is the case, then look up, your redemption is drawing nearer!
Here is an ancient map in Latin, which shows Scythia above the Major body of water the Black Sea. 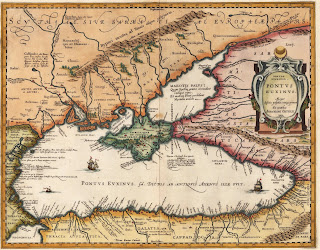