The Message From the Cross of Christ 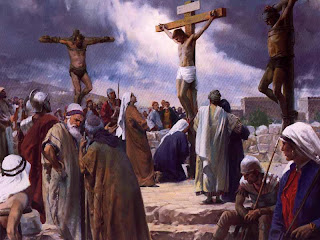 Recently Mark Schultz, contemporary Christian artist, wrote a beautiful song entitled, "Walking Her Home." It follows a string of other tear jerking "Life" songs from various artists that touch all of our hearts, sometimes even bringing tears. These type of songs are very idealist in that they make us for a moment empathize with the depth of love a man can indeed have for his spouse. Often the songs will follow the theme of meeting young, marrying young, having children, watching them grow and then growing old together. However, as touching as they may be they still pale in comparison to the love expressed by Jesus Christ on His road to the cross.

On this road, Jesus was tempted by Satan, confronted by demons, accused by religious leaders, scorned by His family, mocked by His neighbors, challenged by scribes of the law, called names, lied about, nearly stoned, faced poverty, slept outside-homeless, was beaten, tortured, mocked, spit upon, endured hair being yanked from His face, poked in the skull with thorns, flogged, jabbed by a spear, punctured by nails and finally humiliated on a cross in front of the multitudes.


CAN THERE EVER BE A GREATER LOVE?

While Christ hung on the cross He taught us about:

1) Forgiveness - "Then Jesus said, "Father, forgive them, for they do not know what they do." And they divided His garments and cast lots." Luke 23:34

4) Love of mankind - "And at the ninth hour Jesus cried out with a loud voice, saying, "Eloi, Eloi, lama sabachthani?" which is translated, "My God, My God, why have You forsaken Me?"" Mark 15:34

5) Humanness - "After this, Jesus, knowing that all things were now accomplished, that the Scripture might be fulfilled, said, "I thirst!" John 19:28

7) The Sovereignty of the Father - "And when Jesus had cried out with a loud voice, He said, "Father, 'into Your hands I commit My spirit.' " Having said this, He breathed His last." Luke 23:46

When He asked the Father to "...forgive them; for they know not what they do" He was teaching us that in life we must practice forgiving others if we desire to be like Him.

When He said to thief “Today, you will be with me in Paradise” He was saying when we express our faith and trust in Him we will inherit eternal life.

When he gazed upon His earthly mother, Mary, and stated, “Woman, behold your son” and the John, His beloved disciple, “Son, behold thy mother” He was telling us that families are of utmost importance.


When He looked into the crowds and saw the mockery of the Chief Priest’s, Scribes and others from their party saying, “He saved others, Himself He cannot save” He cried out “My God, My God why have You forsaken me!” I believe He loved them so much that He desired that they see their sinfulness that they may repent and be saved. Pointing to the Scripture that would indict them is the first step in one understanding they need a Savior. They could not walk away from the crucifixion guiltless. But even still, they could be forgiven. So immediately, as Scribes and religious leaders, they would know he was quoting Psalm 22:1, a Psalm which also told of the day these self-same priests would mock Him in the exact manner to which they were mocking Him now, Psalm 22:1, 7-8. Why? Because Psalm 22 is a mirror of who they were and who He is. Furthermore, the same passage tells us the object of their mockeries was One being crucified. And yet still more, it would be this Person that would one day rule over the world!

16For dogs have surrounded Me; The congregation of the wicked has enclosed Me. They pierced My hands and My feet; 17 I can count all My bones. They look and stare at Me. 18 They divide My garments among them, And for My clothing they cast lots. Psalm 22:16-18 (NKJV)

24 For He has not despised nor abhorred the affliction of the afflicted; Nor has He hidden His face from Him; But when He cried to Him, He heard. (God heard Him) Psalm 22:24 (NKJV)

27 All the ends of the world Shall remember and turn to the LORD, And all the families of the nations Shall worship before You. 28 For the kingdom is the LORD'S, And He rules over the nations. 29 All the prosperous of the earth Shall eat and worship; All those who go down to the dust Shall bow before Him, Even he who cannot keep himself alive. Psalm 22:27-29 (NKJV)

When He said “I thirst” He again fulfilled what was written before Ps.69:21, another proof that He was the Messiah and that this Messiah would become a man. For it is humanity that has need of water—It is unique to all of God’s creation to thirst. God, coming in the likeness of man should tell us that He is not far off—that He is close at hand—that He understands our hurt, trial and hardship. And finally, because He understands He can have mercy.

When He said “It is finished” He taught us to stay the course. It was Jesus who said, "No one, having put his hand to the plow, and looking back, is fit for the kingdom of God." Luke 9:62 (NKJV) He taught us to trust Him and to endure just as He endured that we too may receive the prize of the high call in Christ Jesus. After the finishing event He gave up his Spirit. It was finished. Mankind could not kill our Lord—Satan could not kill our Lord. He gave Himself up willingly and in Obedience. It was obedience that took Christ, the Lamb of God who takes away the sin of the world, to the cross—it is our obedience that also will bring many into His presence.

When He said “Father, into Your hands I commit my Spirit” He taught us that we are all accountable to the Father. That ultimately He controls all things, even the daily events in our lives fall under the umbrella of His Sovereign control. David could praise God for the wide place (Ps. 18:36) He placed him in. We also have a wide place of grace in which to walk, but the pursuit of God Ps. 23:6, never allows us roam too far, because God is in control.