Constrained to Serve through True Repentance 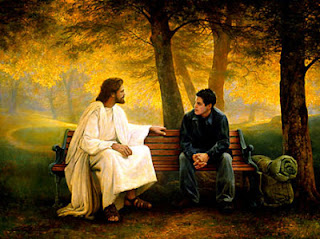 Many have asked, "why are some believers really excited about Jesus and others, not so much?" This ia a good question and one I am inclined to answer the following way. Some have been forgiven much and so they love much, Luke 7:47. The impact is heartfelt and the heavy burden of sin rolls off their backs like water off of a duck. For this they are eternally grateful and often desire to serve immediately. Like Zacchaeus (Luke 19:8), who promised to give one half his money to the poor and four times in taxes back to all he stole from, they with haste want to show their gratitude to God and man. But the deeper answer may be found in the amount of worth we place on being forgiven of sin as opposed to the value of continuing in it. Maybe some do not see the worth in being forgiven nor the power in sin to separate. Maybe too, they see eternity as something that they themselves have an eternity to wait before they need to reckon with it, so eternal things, like obeying God and service are just not that important. But what I really believe is at work in a radically changed life is Repentance; that is, the change of heart and mind toward sin and its effect on a relationship to God (Gr. Metaneo). Before one can come to a relationship to Christ they must first internalize the separation that sin has made in their life. They can never pray for forgiveness if they do not realize they need to be forgiven. Sin is powerful; but it is a mocker. If personified, it would mock God and say I am not so bad. It would do its best to make its nature at the worst, grey, but certainly not black. This is an issue because some do not believe that all sin separates but only "bad" sin, such as murder or adultery.

The fact is, all sin separates. From the whitest lie to the darkest deed it all carries the same weight of power
– the power to separate from God. This is the crux of the matter. Many have heard the words of the gospel and only responded in a calculating manner. In their hearts they want forgiveness but some are unwilling to have a change of heart and mind toward the sin and darkness in their life. It is true that John 3:16 states, "For God so loved the world that He gave His only begotten Son, that whoever believes in Him should not perish but have everlasting life." But Jesus qualified what He meant when He stated in the passages that follow, "17  For God did not send His Son into the world to condemn the world, but that the world through Him might be saved. 18  He who believes in Him is not condemned; but he who does not believe is condemned already, because he has not believed in the name of the only begotten Son of God. 19  And this is the condemnation, that the light has come into the world, and men loved darkness rather than light, because their deeds were evil. 20  For everyone practicing evil hates the light and does not come to the light, lest his deeds should be exposed. 21  But he who does the truth comes to the light, that his deeds may be clearly seen, that they have been done in God." John 3:17-21 (NKJV)

Note Jesus qualified the word "condemned" which results in separation as being a work of darkness that is greater loved than His light. The Light reveals the darkness and true believers come to His light, but the revelation of the evil causes some sinners to shield their eyes and turn away because they love the darkness. This love of the darkness must be put off. True belief is recognizing that sin is darkness and must be rebuked and laid at the Cross to be exposed by Christ. This act of agreeing with the light of Christ that our deeds are evil and have separated us from His holy presence spurs us into a change of heart and mind toward the deeds of evil. In turn we confess our belief and dependence in Christ and wholeheartedly, by faith, submit to His sovereign will.

This is done through prayer. Rom 10:10 tells us, "For with the heart one believes unto righteousness, and with the mouth confession is made unto salvation." Romans 10:10 (NKJV) Therefore biblical belief in Jesus is more than a casual recognition of His existence, it is the swaying power of the Holy Spirit at work, in convincing and convicting us that our sin has separated us from God and that we must believe upon the existence of Jesus in His pre and post resurrected state as the only One who can forgive us and heal the breach, Acts 4:12. If we follow His prescription for life we can experience His love in a greater way.

We can never repay God or appease Him for our sin in any way, Christ did this for us. But we can show our gratefulness through active service and fervent love to Him for what He did for us. 1 John 4:4