Caught in the Grip of Sin?

April 27, 2011
The Lord has placed on my heart this day all of those who are caught in the grip of a sinful lifestyle. Many have come to edge of life and they are clueless as to what their life is worth or whether anyone cares. I would just like to say, if that describes your life and you really would like to be set free from the oppression you are experiencing, that there is hope! You have to understand that God does love you. He knows your every move and where you are right now. Maybe you have never read the story of the "Woman at the Well." But if you have time please read this story. I have underlined some important things to think about: 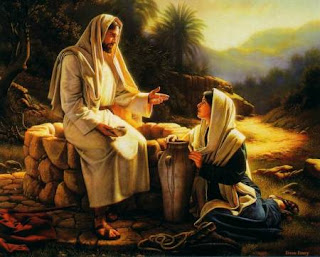 3 He left Judea and departed again to Galilee.
4 But He needed to go through Samaria.
5 So He came to a city of Samaria which is called Sychar, near the plot of ground that Jacob gave to his son Joseph.
6 Now Jacob's well was there. Jesus therefore, being wearied from His journey, sat thus by the well. It was about the sixth hour.
7 A woman of Samaria came to draw water. Jesus said to her, "Give Me a drink."
8 For His disciples had gone away into the city to buy food.
9 Then the woman of Samaria said to Him, "How is it that You, being a Jew, ask a drink from me, a Samaritan woman?" For Jews have no dealings with Samaritans.
10 Jesus answered and said to her, "If you knew the gift of God, and who it is who says to you, 'Give Me a drink,' you would have asked Him, and He would have given you living water."
11 The woman said to Him, "Sir, You have nothing to draw with, and the well is deep. Where then do You get that living water?
12 Are You greater than our father Jacob, who gave us the well, and drank from it himself, as well as his sons and his livestock?"
13 Jesus answered and said to her, "Whoever drinks of this water will thirst again,
14 but whoever drinks of the water that I shall give him will never thirst. But the water that I shall give him will become in him a fountain of water springing up into everlasting life."
15 The woman said to Him, "Sir, give me this water, that I may not thirst, nor come here to draw."
16 Jesus said to her, "Go, call your husband, and come here."
17 The woman answered and said, "I have no husband." Jesus said to her, "You have well said, 'I have no husband,'
18 for you have had five husbands, and the one whom you now have is not your husband; in that you spoke truly."
19 The woman said to Him, "Sir, I perceive that You are a prophet.
20 Our fathers worshiped on this mountain, and you Jews say that in Jerusalem is the place where one ought to worship."
21 Jesus said to her, "Woman, believe Me, the hour is coming when you will neither on this mountain, nor in Jerusalem, worship the Father.
22 You worship what you do not know; we know what we worship, for salvation is of the Jews.
23 But the hour is coming, and now is, when the true worshipers will worship the Father in spirit and truth; for the Father is seeking such to worship Him.
24 God is Spirit, and those who worship Him must worship in spirit and truth."
25 The woman said to Him, "I know that Messiah is coming" (who is called Christ). "When He comes, He will tell us all things."
26 Jesus said to her, "I who speak to you am He." John 4:3-26 (NKJV)
The passage tells us many things but most importantly, I shows Jesus as One who knows those who are in need. He needed to go see this woman who had obviously been married 5 times and was most likely on the edge about life. She did have faith in God and knew that the Messiah would one day come but who was she that He would even care? Jesus did care, and He met her at a place where He could give her His life giving message. His Words were simply "If you knew the gift of God, and who it is who says to you, 'Give Me a drink,' you would have asked Him, and He would have given you living water." God has not changed! He still sits at the well awaiting only for you to ask Him so that He may give you His life-changing water to quench your thirst. He exists, that we may seek Him out:
26 And He has made from one blood every nation of men to dwell on all the face of the earth, and has determined their preappointed times and the boundaries of their dwellings,
27 so that they should seek the Lord, in the hope that they might grope for Him and find Him, though He is not far from each one of us;
28 for in Him we live and move and have our being, as also some of your own poets have said, 'For we are also His offspring.' Acts 17:26-28 (NKJV)
Again He knows your plight and where you have been. But He did not come into the world to condemn it but to save it, John 3:16ff states:
16 For God so loved the world that He gave His only begotten Son, that whoever believes in Him should not perish but have everlasting life.
17 For God did not send His Son into the world to condemn the world, but that the world through Him might be saved.
18 He who believes in Him is not condemned; but he who does not believe is condemned already, because he has not believed in the name of the only begotten Son of God. John 3:16-18 (NKJV)
There it is. In plain view. He came to save and He came to save you! You can receive freedom from your sin and its curse if you will only come to Him as He waits and lay your burdens at His feet. Confess to Him in prayer your hurt and your pain, ask Him to forgive you and to change you, that you may become what He desires for you in this life. Do not listen to the other voices who live only to judge and condemn. Just simply come to Jesus as you are and in prayer receive His life giving water! Trust me you will never thirst again!!
God Bless
Bro. Mike