April 23, 2011
The Bible speaks of a spiritual battle that continues to be waged in the hearts and lives of Christians for all of their earthly existence—the war between the Spirit of God and the lusts of the flesh. In light of this, the apostle Paul gave this directive to all Christians:


It is easy to recognize this battle when we think of it in terms of selfishness or instant gratification. The reality of the battle becomes apparent when we have chosen to follow our lustful cravings rather than being self-sacrificing, whether it is unto the Lord or unto another. But there is another—often hidden—side to this battle that we do not always recognize. It is the battle to think and look at life in terms of what we know best, our human side. After all, we were born in the flesh and raised up in the flesh by human parents and instinctively we act and think in terms of flesh relating to flesh, or humanity relating to humanity. The best illustration of this, I think, is love. It is this love we have trouble emulating because of the weakness of the flesh. When we think of the love that Jesus has toward humanity we have a hard time seeing it as unconditional for to love unconditionally is something, by nature, we cannot do. So we do not relate well in terms of that. Yet, the Bible teaches we are to be self-sacrificing and to love as Jesus loved.
This type of love is what we have come to know by the term, Agape, or sacrificial love. It is a love that Jesus displayed incessantly, both toward mankind and toward the Father. It is this love that drove Him to the cross, knowing that His sacrifice would bring reconciliation in the relationship that sin has severed between man and God. It is this love that drives a parent to sacrifice for the needs of their children. It is this type of love that would make a parent play the part of a madman, if that’s what it took, to protect the life of their child.
It is precisely this “Madman” role that Jesus seemed to display at one point, during the last week of His life. He went into the Temple for a second time and acted, in terms of humanity, flagrantly disrespectful, and seemingly crazed as the money changing tables flew outward, splashing coins all about, and the animals went on a rampage as they were released from their pens.
Matthew 21:12-15 (NKJV)
12 Then Jesus went into the temple of God and drove out all those who bought and sold in the temple, and overturned the tables of the money changers and the seats of those who sold doves.
13 And He said to them, "It is written, 'My house shall be called a house of prayer,' but you have made it a 'den of thieves.' "
14 Then the blind and the lame came to Him in the temple, and He healed them.
15 But when the chief priests and scribes saw the wonderful things that He did, and the children crying out in the temple and saying, "Hosanna to the Son of David!" they were indignant. 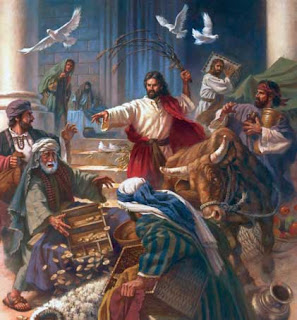 The scene the Bible describes conjures a display of chaos, tumult, and anger. Surely, the temple priests and the merchants felt slighted as their profits ran amuck. But in reality, this scene demonstrates the very point of this article. Jesus, the madman, was Himself very frustrated that the supposed “leaders of the people” would display in a very bad light, to the world and its onlookers, the character and nature of God. Did the Lord approve of selling sacrifices in the temple? Did He approve of usury, profiteering, and the selling of merchandise to those who were coming to the temple to worship? Where was the self-sacrifice in taking the first-ling of your flock to present to the Lord? Were the animals sold a proper sacrifice?
To the casual onlooker and the uninformed, Jesus, was a crazy lunatic gone wild. Such public disruption must be judged, especially when the actions disregarded the authority of the temple priests and leaders. But does that really give the Lord a fair shake?
The Bible describes the motive of Jesus and the thoughts of those closest to Him, His family, in the prophecy of Psalm 69:9
Psalm 69:8-9 (NKJV)
8 I have become a stranger to my brothers, And an alien to my mother's children;
9 Because zeal for Your house has eaten me up, And the reproaches of those who reproach You have fallen on me.
Saving Jesus’ mother Mary, His half brothers and sisters, had already alienated themselves from Him. Seriously, just how could a boy raised among them and mothered by their own mother, be the Messiah? How could their very brother be who He claimed to be? But Jesus knew this would be an issue and He was also aware of the fact that He indeed would be alienated by the masses. But His zeal for the Father and His will, His purpose, and His message of redemption must be protected at all costs. And yes, if it meant acting like a crazed madman was what it would take to show the displeasure of the Father, then so be it. After all, it was better to overthrow the tables of the money-changers than to inflict catastrophic judgment from the throne of the Father.
In our humanity, our flesh, we see Jesus, for a moment, as crazed and the story flies in the face of the Jesus we understand to be gentle as a lamb and as loving toward humanity as one could be. But that is where the rub lies. Jesus’ love for humanity was so great that He would go to any length to protect the image of Holiness that redemption would afford to the “called-out-from-among-them” people that God desires His followers to be.
So in the flesh we see Jesus as a madman, but in the Spirit we see Him as our loyal champion and the author/protector of our eternal salvation.
My question for you this Easter weekend is this, How do you see Jesus? Does your life display a crazed zeal for the things that are Holy? Do you, in righteous anger, overthrow the things in your own life that are not exactly mirroring the image of God?
The world would be a happier place if Christians would get serious about the things that please and reflect the image of God, that includes our lives.
God Bless and may you have a blessed Resurrection Sunday!