June 01, 2011
“When trouble hits home things are a different story,” she told her friend as they stood staring at the aftermath of the mind-wrenching and gut-aching tornado that had just flattened their neighborhood. That same sentiment is expressed a thousand times a day in disaster-stricken and war-torn areas of the globe. It is easy for us to discuss our faith in God and His willingness to bring help and hope into our lives and to other people in times of peace. Why? Because the message is simple and it is attractive. But to the person or family who, in a moment, has lost all they ever worked for and in many cases, the life of a loved one, it is a different story.
It’s an age old question that has bobbed up and down for millenniums, like a goose peering precipitously, cautiously over a fence row always appearing in times of distress and quietly vanishing in times of ease. Somehow, we cannot get a firm grasp on why he appears when disaster or loss strikes. The truth is he has never vanished. Like death and taxes those geese have always been there. But somehow, we have become accustomed to the fact of death and we tolerate taxes, but we have a hard time wrapping our arms around sudden loss. Could it be that our biblical worldview of God makes us view God in the same way we view a lucky “rabbit’s foot?” As long as we have Him in the pocket all will be ok.
Jesus told the story of the Tower of Siloam in Luke 13:
Or those eighteen on whom the tower in Siloam fell and killed them, do you think that they were worse sinners than all other men who dwelt in Jerusalem?
I tell you, no; but unless you repent you will all likewise perish." Luke 13:4-5 (NKJV) 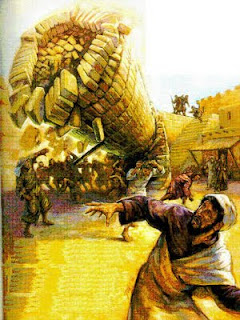 Jesus’ point was that the disaster did not occur because of any ones sinful lifestyle. It occurred because disaster can strike at anytime and anyplace without warning. Those who are in its path will be affected. What is important is to have your house in order. We may perish in this earthly existence but we certainly do not want to wake up in Hell because we refused His offer of eternal life in Heaven.
You would think that if the question of “why bad things happen to good people” was going to be a big issue in the minds of humanity that Jesus would have just forthright addressed it in clear terms. But He did not because He knew that He Himself was the answer. You would think that when Elijah pronounced the famine that was to come upon Israel in the days of King Ahab (1 Kings 17, 18) that God would have protected Elijah from suffering, since he was a great man of God. But the scripture says Elijah suffered as well. You would think that when the Apostle Paul suffered with sickness and the thorn in the flesh that God would have delivered him, also since he was a great man of God. Instead Elijah was miraculously fed by the ravens to help him through the trial and Paul embraced the trials as God’s will in teaching him to be humble.
Jesus said, “These things I have spoken to you, that in Me you may have peace. In the world you will have tribulation; but be of good cheer, I have overcome the world." John 16:33 (NKJV)
Death and taxes will surely come, and so will loss and disaster. My counsel is this, put away the rabbit’s foot that you view as God. Face reality, there is a heaven and there is a hell, and the earth on which we stand is neither. There will be trial here but there will not be in heavens eternity. Jesus is asking today, will you place your hope in Him? Take your eyes off of the things that surround you and do your best to be what He created you to be. For the things you cannot control, trust that God, indeed, has the answers.
God Bless
Bro .Mike

Anonymous said…
I needed to hear that today. The home education today is a little stressful. God is faithful and I will continue to walk in the path God has laid. Peace and Prayers, Angel
June 2, 2011 at 9:09 AM

Anonymous said…
Great Message Mike, and in line with what we have been told "today is the day of salvation"

I loved reading this "What is important is to have your house in order. We may perish in this earthly existence but we certainly do not want to wake up in Hell because we refused His offer of eternal life in Heaven."

thanks for your willingness to highlight our need to be "ready"